December saw us at Whitecliffe Fashion Show 2012 to see what was brewing in the fashion field.Once they knew I was going to see the Whitecliffe Fashion Show, a friend mentioned that I might see the ‘next big thing’ while I was there. That certainly wasn’t what I was looking for. These students are the future of the fashion industry, not just ‘the next big thing’ which by its very title means something that can be replaced, as something newer and better comes along. We are wanting longevity from our industry, not fleeting flashes of brilliance that sometimes can’t be backed up by a strong skill set, or by the right amount of determination. We want to see faces we will become familiar with as they truly become part of the industry.

First we got to see a collection of three outfits from the second year students, which I always find interesting as they seem to often be more adventurous and less worried about the commercial aspects of their collections at this point. With eighteen second years showing, I have included the ones that particularly caught my eye. They were followed by the third and fourth year students respectively.

Chloe Elmes’ Sukeban SS2012 was strongly influenced by Sukeban and Harajuku, Japanese street fashion. With strong use of colour and texture with fabric flowers on PVC capes, and flowers in the hair – this was a strong all round collection. I particularly loved the pom-pom covered shoes showing great attention to detail. 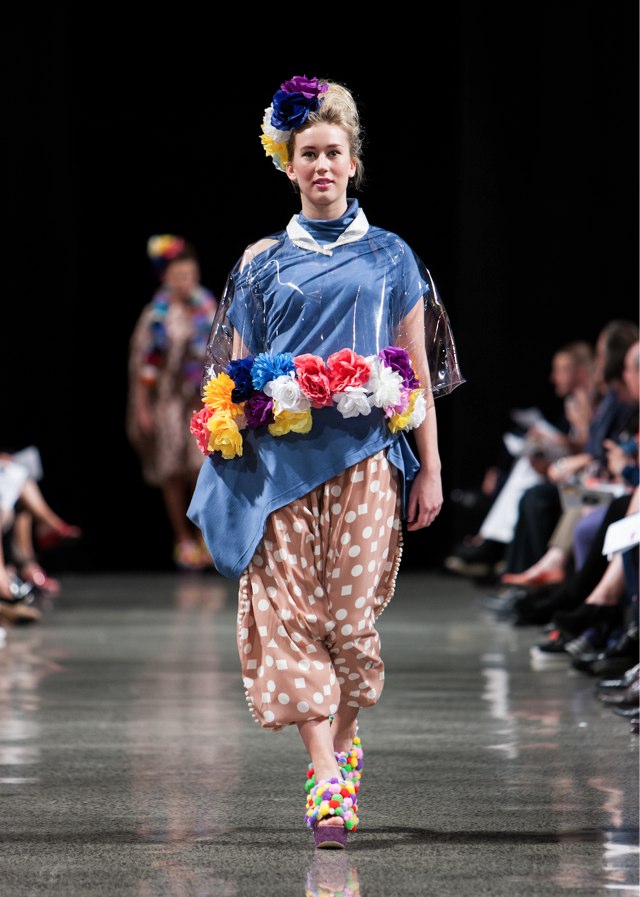 Louella Huang’s Innocuous SS2012 was inspired by the epic Studio Gihbli film, Howl’s Moving Castle (a particular favourite of mine). She used the film and traditional children’s wear as her starting point, and with the addition of traditional sewing techniques such as smocking and pleating, ended up with a cohesive and confident collection. 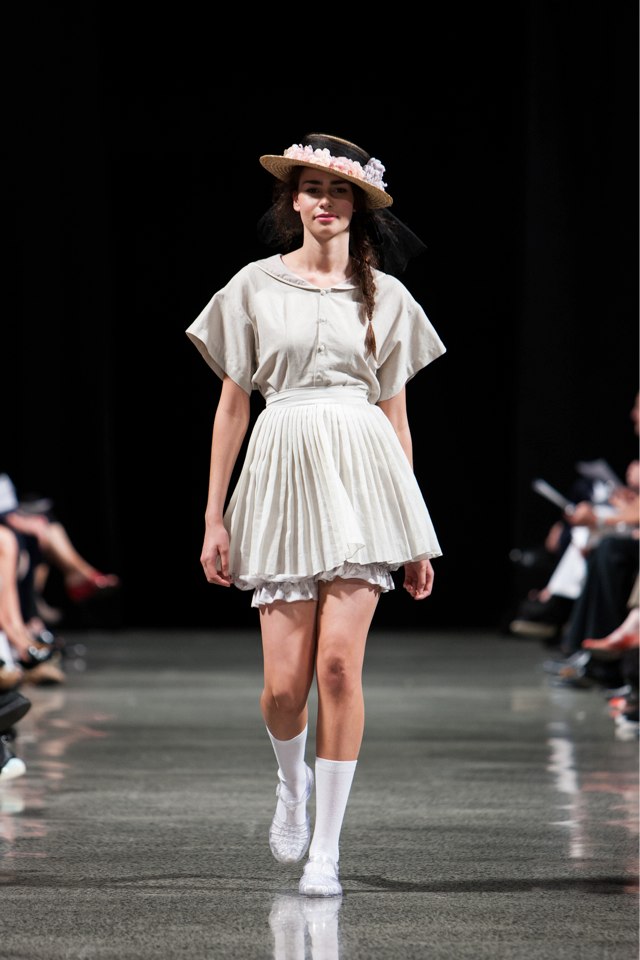 Jacqueline Lim’s Anabasis AW2012 was a collision of 19th Century dress and artist Egon  Schiele’ radical approach to the stark depiction of the human form. This was a very well though through collection with beautiful accessories, especially the clutch. The styling was spot on. 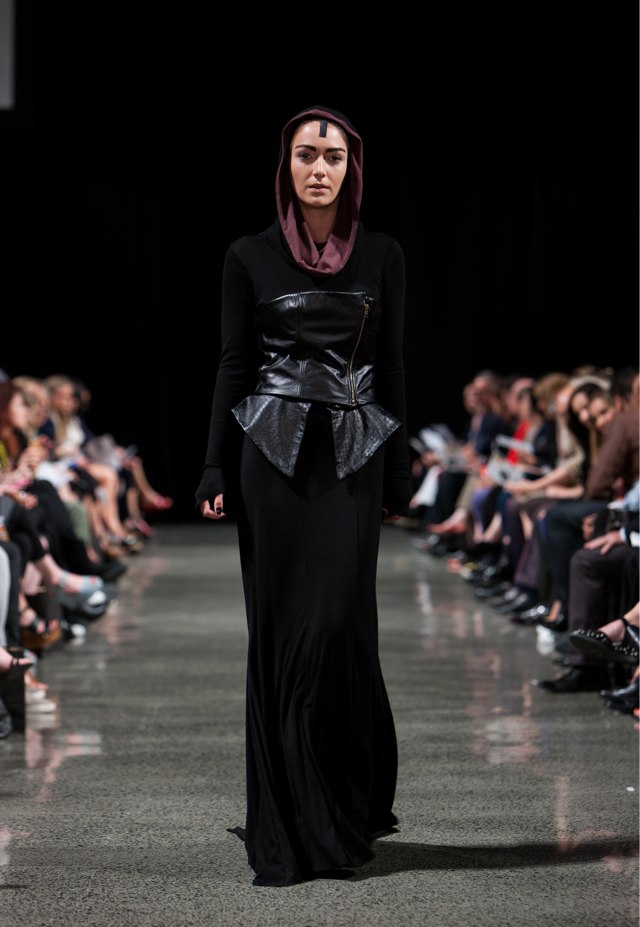 Zoe Noles’ All for One and One For All SS2012 was one of two collections that used Feminist icon Rosie the Riveter as their influence, but did quite different things with the symbol. Mixing the 40’s styling with androgynous clothing came across as assured, and worked beautifully. 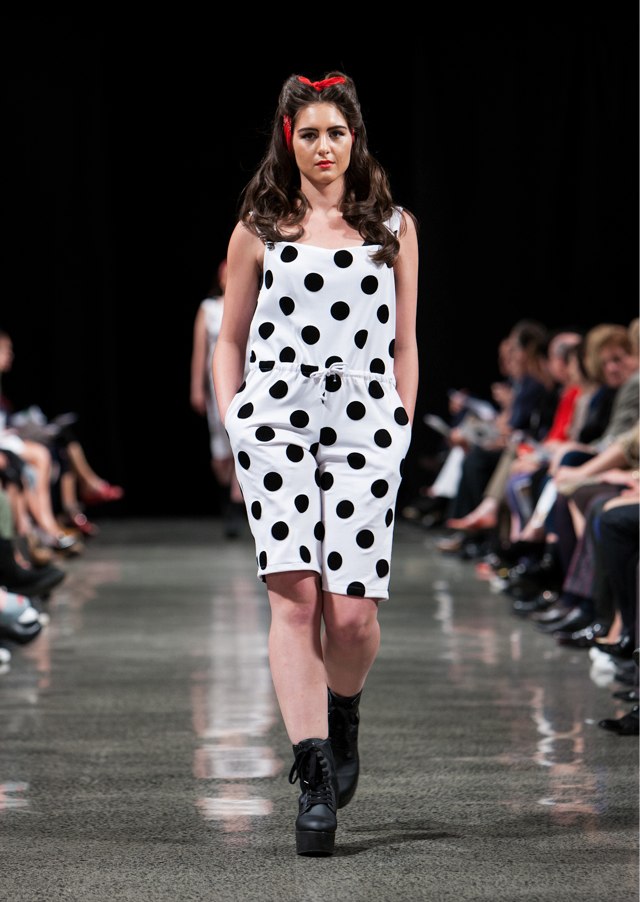 Wilson Ong SS2012 1138 was inspired by science fiction and its exploration of a Utopian Society. With beautiful tailoring, styling and attention to detail, especially the sheer backpack, this was beautifully put together. 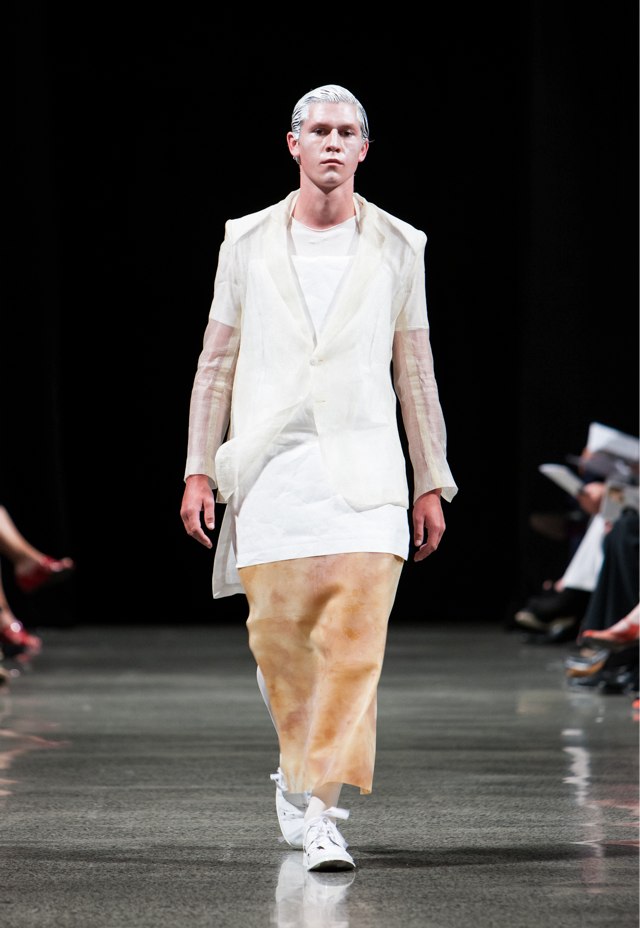 Nicole Wesseling  Vincent AW2013 combining Vincent Van Gogh and Vivian Maier’s 1950s street photography, this was just a gorgeous collection. With just three outfits, each complemented by an impeccably dressed child as an accessory, she managed to get six incredible outfits down the runway. I couldn’t fault it – it was just so well done. Easily one of my top three for the night. 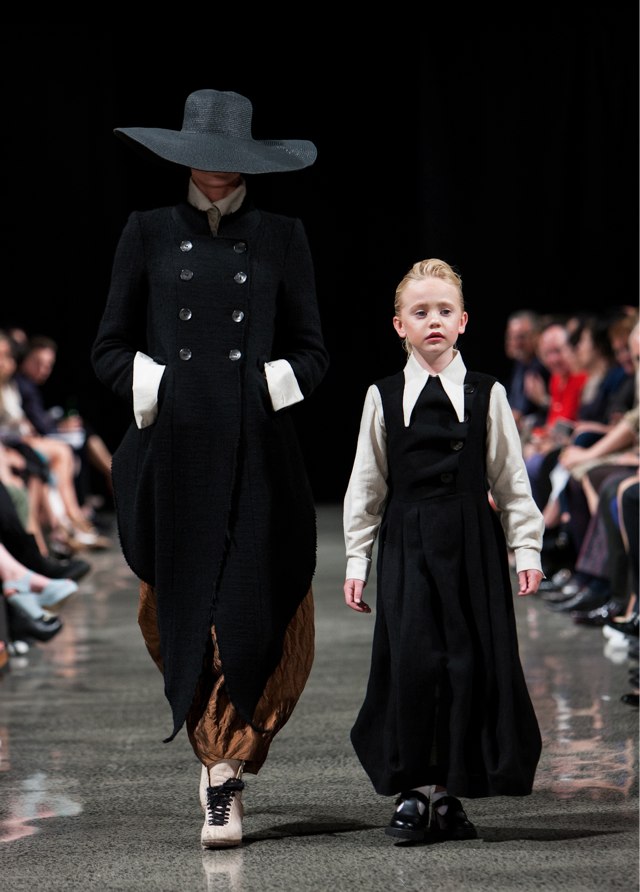 Blair Wheeler’s – A Fixation AW2013 is certainly a product of Blairs obsession with experimentation with fabrics and liquid rubber, cement and tars. He got the experimental award for the evening, and well deserved it was. 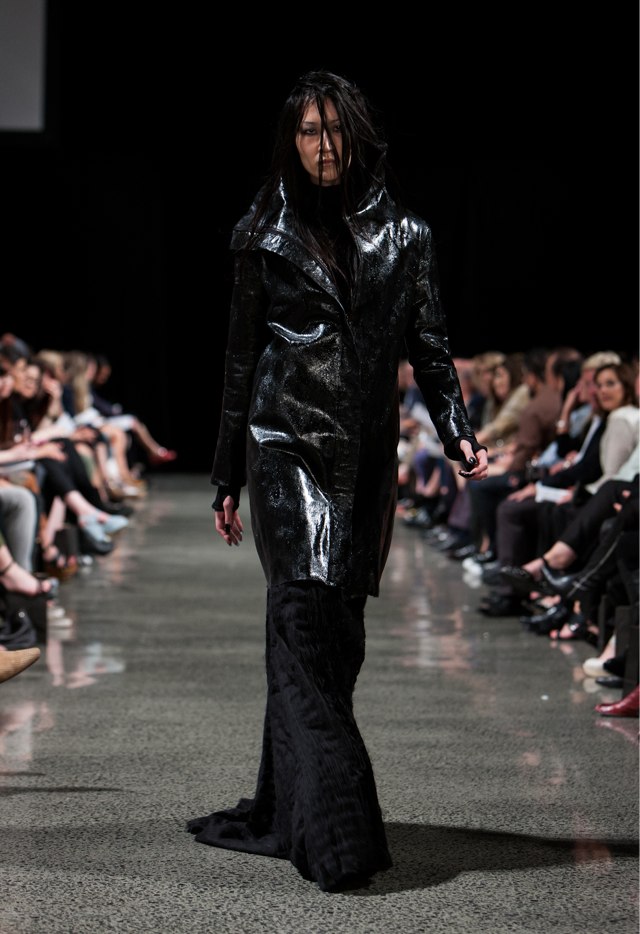 Kido Deng Creek AW2013 is based upon Vorticism – a stream of motion that is explored through the machine age and all things modern. With a fabulous dark aesthetic and great use of possum skin, this panelled, twisted collection was the complete picture. It was exception accomplished collection. It is extremely obvious as to why he won the 1st prize for the third year students. From memory, he won an award the previous year as well. It was also easily in my top three for the night. 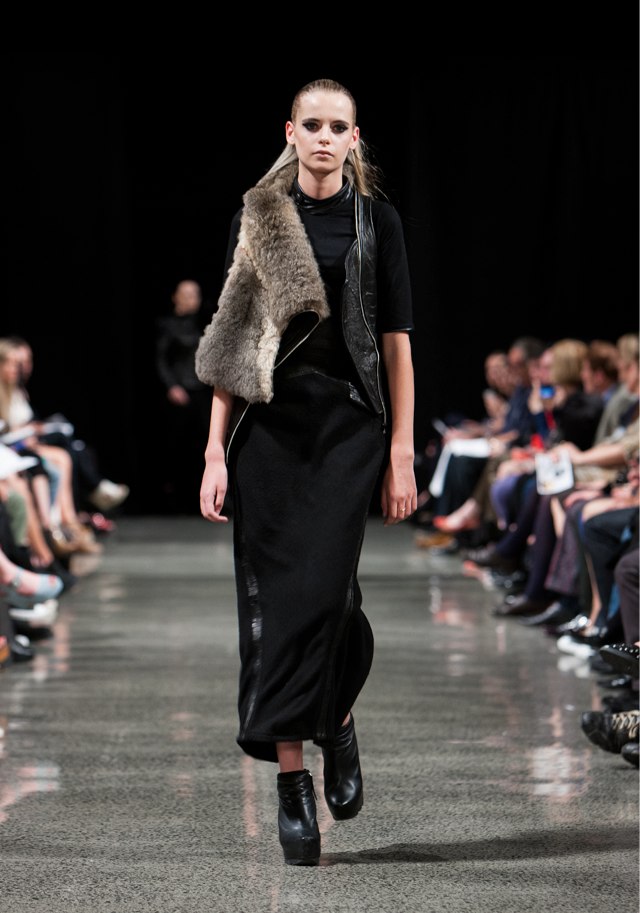 Courtney Harper Interpretations of sight and sound SS2013 inspired by the architecture of Haussmann’s Paris. With pleating and layering that gave in an architectural feel. Working in a light palette with diffused fabrics, the two played together well. 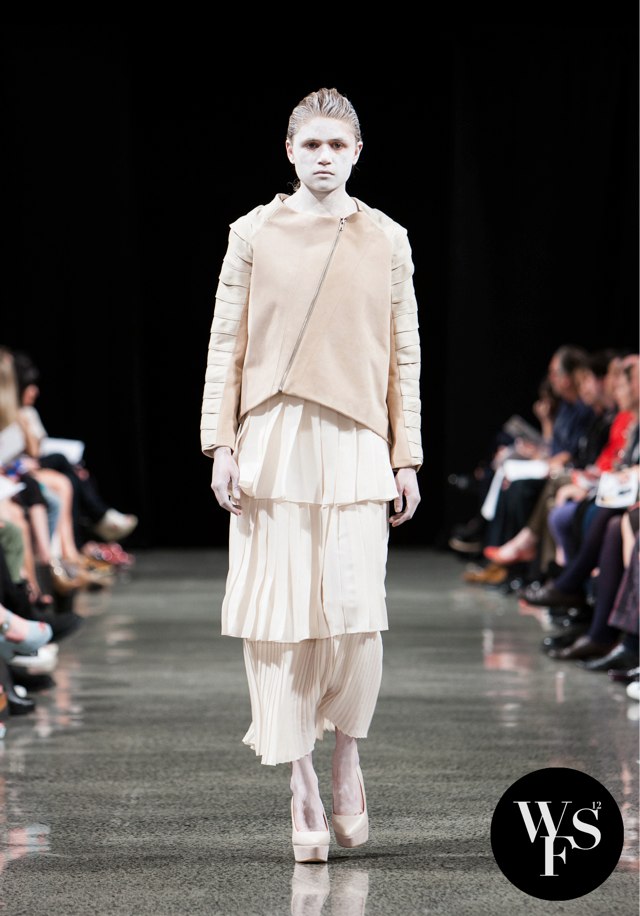 Kama Scretching Make Do and Mend SS2013 was the second of two collections referencing Rosie The Riveter. With its amazing textile and pattern mixing – she has a real flare for colour.  The styling was just spot on – I loved pretty much everything about this collection. 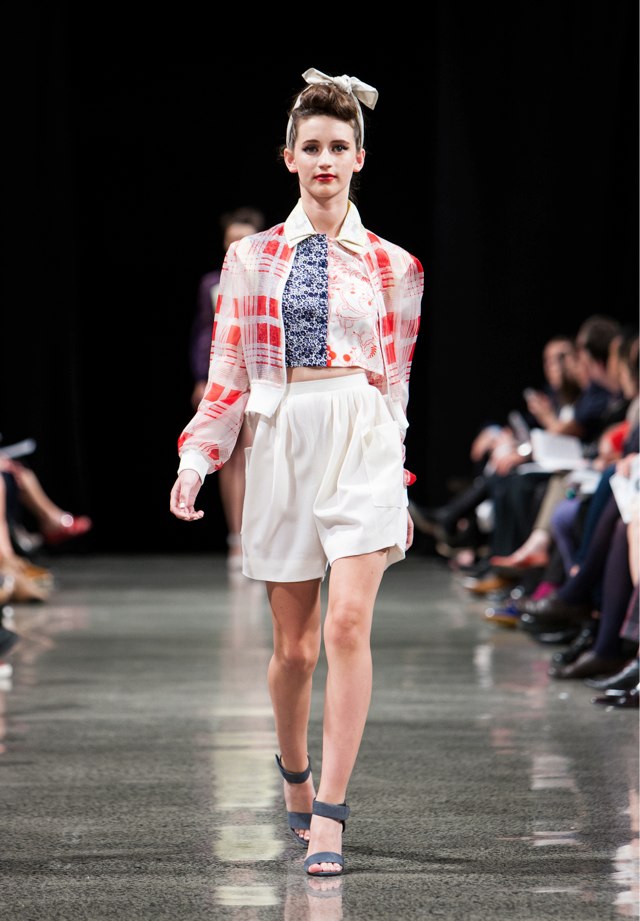 Erin Balle won the second prize for her year with her Airbourne AW2013.  Beautifully executed and eminently wearable, this tailored collection was just what you would want to see from a fourth year student. 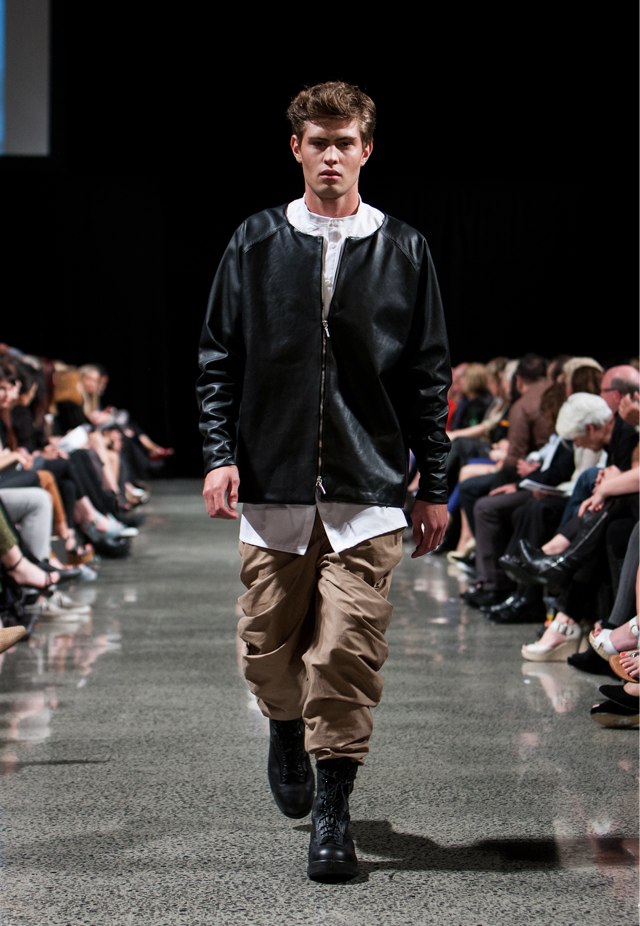 Sean Cai, had for me, the most memorable collection of the evening with his Overpowered AW2013 collection. Inspired by women in power – it most certainly was power dressing at it’s best.  Very well thought out and detailed, I loved the use of red brocade, lace shirt and skirt combination and the black and white clutch. It was most obvious as to why he had won the 1st prize. The styling was gorgeous with standout red shoes. It was all pretty much perfect. 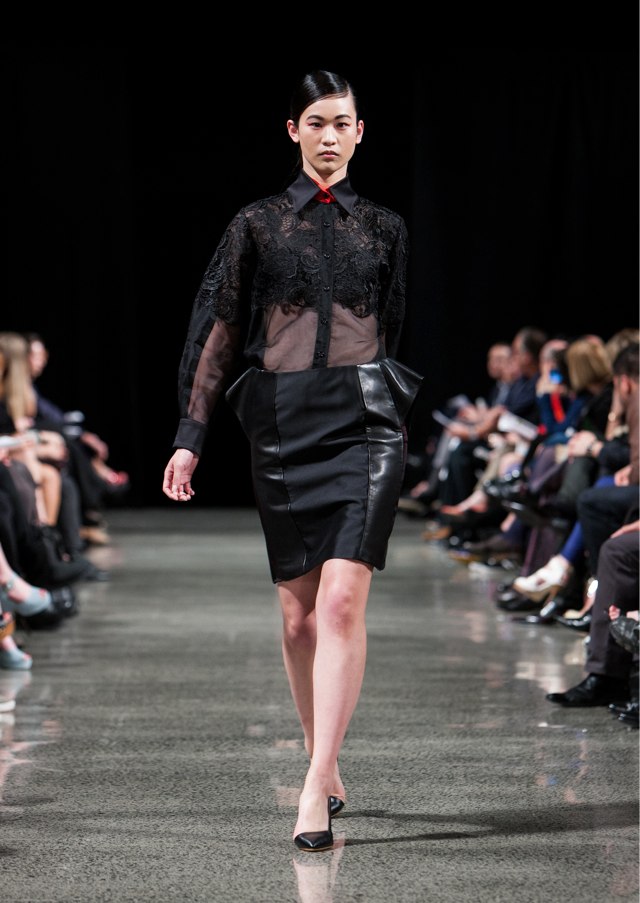 Trish Peng was influenced by geometric forms in her Piece by Piece SS2013. Her very obvious preference for bold colours and contoured shapes were used to great effect. One of the best uses of colours for the evening. I loved the strong cerulean blue. 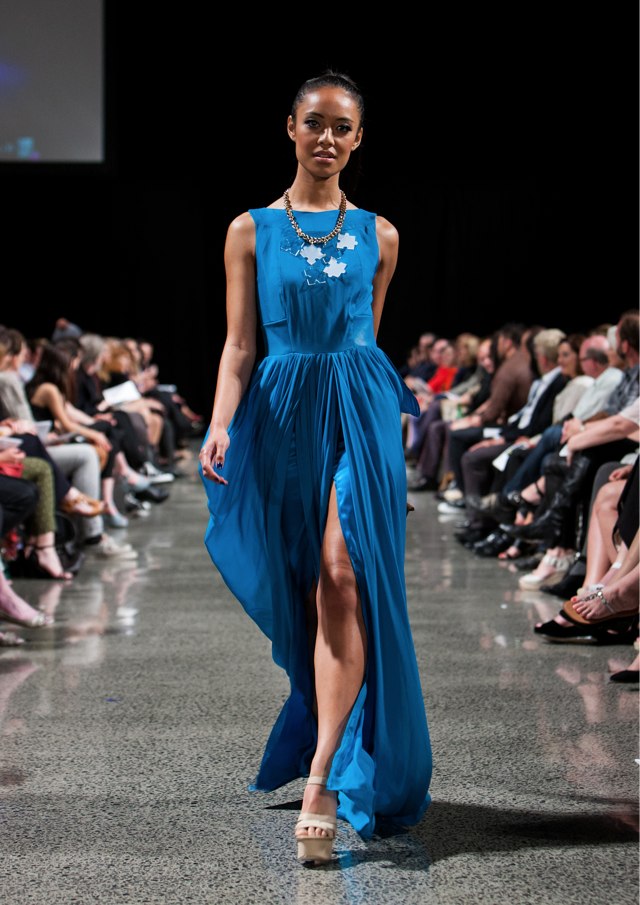