With so much on offer this year – it really is hard to know where to start!  We have already booked our tickets on the first day as we didn’t want to miss out.  We aren’t exactly going to all of the films that we are highlighting here, but we are going to quite a few.  With pretty much something for everyone – we have tried to cover all the bases.

By the time you read this we will have already seen Wes Anderson’s Moonrise Kingdom filled with his quirky array of characters and humour.  I loved his version of The Fantastic Mr Fox  – Roald Dahl stop animation film was a real thing of beauty.  With a star studded line up of Bruce Willis, Edward Norton, Tilda Swinton, Harvey Keitel and Anderson regular, Jason Schwartzman.  It looks suitably magical with the right amount of daftness thrown in. Playing 25th July at the Civic at 4.30.

I have, of course, passed on my love of animation to my children (but not my Husband) so we will all be off to see some really splendid animation this year.  As great fans of the iconic Studio Ghibli, From Up On Poppy Hill is head of our animation list.  Originally conceived by Miyazaki Hayao from a 1980 manga, it has now been realised by his son Goro (Tales from Earthsea).  Set in Japan in 1963, it is the story of schoolgirl Umi, her friend Shun, and how they have the courage to follow their own convictions.  These films are never just for children – adults get to enjoy them as well. Subtitled. Playing at the Civic 29 July 1.00pm 31 July 10.15am.

A Monster in Paris is produced by Luc Besson (The Fifth Element) and directed by Bibo Bergeron (A Shark’s Tail).  Set in Paris (obviously) in 1910, this is a crazy story about a boy, a girl and a giant singing flea.  Trust me – it all works!  With the voices of Vanessa Paradis, Catherine O’Hara, Adam Goldberg, and the singing voice of Sean Lennon – this is a goodie. Playing at the Civic 2 Aug 10.45am, 4 August at 11.00am and the Bridgeway 5 August 4.00pm.

Of note also is Le Tableau, and for the younger viewers, The Gruffalo’s Child with voices of Helena Bonham Carter and Robbie Coltrane.

The two NZ made films that I would love to see are How Far is Heaven by Chris Pryor and Miriam Smith.  Set in the isolated community of Jerusalem on the Whanganui River, the filmmakers show us through the four seasons.  And into the lives of the three Pakeha nuns from the convent set up there in the 1880s. It follows them as they work with the community, make preserves, work the land and help at the school. And of course asks the question (very quietly) of how relevant they are in the modern day.

Maori Boy Genius is the story of Ngaa Rauuira Pumanawawhiti, a charismatic 16 year old carrying the great weight of expectation. The film follows him to Yale, at a critical point in his education, as he enrolls in intensive science seminars. In a world away from his wider whanau (his Father accompanies him),he encounters more daunting challenges than have come his way before. Playing at SKYCITY Theatre on both the 24 July at 6.30pm and 26 July at 10.30am.

The adorable, feel-good Where Do We Go Now? is the wonderful story of women from a remote Lebanese village working together to save their men.  Embroiled in a deep-seated religious war that has been going on for far too long, the women decide to do something practical to prevent their men from killing each other. Funny and touching – it is a must see. Playing at the Civic 20 July at 11.15am, 22 July at 3.30pm and The Bridgeway 27 July at 6pm.

Bernie sees Jack Black in his best ever role as the charming real life character Bernie Teide.  Beloved in his community with his old-fashioned good manners and charm, he is the favourite of all the old ladies of Cathage, Texas.  When he confesses to murdering one of the old ladies, so loved is he, that no one can quite believe him. With Matthew McConaughey back with his Dazed and Confused director Richard Linklater (School of Rock) it looks like it will just hit the spot. Playing at the Civic 21 and 23 July at 9.15pm and 3.30pm.

At a time when most directors have long given up, Ken Loach at 75 is still going with this wee gem of a film.  The Angels’ Share is a reference to the 2% of whisky that evaporates in the cask each year. This film about a collection of reprobates that meet at court, as they are all sentenced for an array of petty crimes. Our ‘hero’ Robbie has one last chance to save himself and his newborn son from the hard life he has lived so far.  Witty and warm – this is unusually joyful for Loach, but a real winner.  It plays at the Bridgeway 20 July at 6pm and the Civic on both the 21 and 23 July at 6.45pm and 1.00pm.

As far as horrors go – the re-screening of The Shining is a must if you have never seen it on a big screen. Jack Nicolson at his insane best. Playing at the Civic 27 and 28 July 3.30pm and 3.45pm.

While in the US recently I met someone who had worked on The Cabin In The Woods and he had nothing but fabulous things to say about the film – and about director, Joss Whedon.  He would tell me nothing about the film itself other than the fact that it was exceptional.  With our own Anna Hutchison and Australian Chris Hemsworth this is an intelligent horror, stripping back the genre and making us look at it with totally new eyes. Playing at the Civic on the 20 and 24 July at 9.30pm and 4.15pm.

The incredible thing about the film festival is the sheer breadth of things available to see.  For me the must see of the festival is the film Bully. It is a wrenching look at bullying in the US school system (read everywhere).  Lee Hirsch’s documentary made headlines in the Sates for all the wrong reasons – the use of the f-word.  This gave the film a rating that meant the very kids that needed to see it, couldn’t.  The rating doesn’t apply to NZ, so lets take the opportunity to see this heartbreaking film. Plays at the Civic on both 3 and 4 August at 10.15am and 1.15pm.

This Must Be The Place definitely has the amazing Sean Penn playing the strangest character of his career.  Cheyenne, a retired Goth rocker (think Robert Smith from The Cure), is quietly passing his days in Ireland.  His dying estranged Father draws him back to the States.  His bizarre road trip in search of a Nazi war criminal means he crosses paths with an incredible cast of characters – Frances McDormand, Judd Hirsch, Harry Dean Stanton and David Bryne.  It has a quiet pace to it – and is neither a comedy nor a drama, but both. It is playing at SKYCITY 20 July at 2.00pm, 21 July 3.15pm and 22 July at 8.30pm. 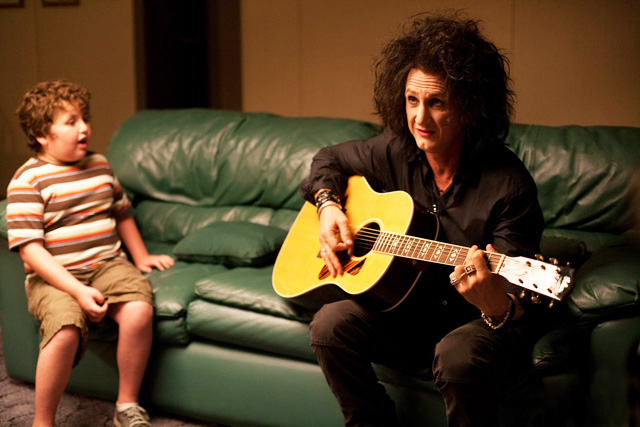 Beasts of the Southern Wild looks like a complete gem.  According to The Guardian’s Damon Wise “It’s a film so completely unique that it’s hard to imagine how it was ever made.” Featuring the then-six-year-old  Quvenzhane Wallis in an amazing mixture of gravity and spontaneity, this film follows her as she leaves her hard drinking Father in search of her long-lost Mother.  What follows is filled with fireworks, prehistoric creatures, the Elysian Fields, reality and imagination. It plays at the Civic on both 19 and 26 July at 7.30pm and 4.00pm respectively.

Killer Joe is my Husband’s choice.  With Matthew McConaughey playing the title character – as a Texan cop with a sideline in murder.  By director William Friedken (The French Connection), the film follows Joe and his bent moral code of conduct as he tangles with Thomas Haden Church and Gina Gershon who want Church’s ex-wife killed.  All hell breaks looses and things get very ugly. It is playing at SKYCITY 20 July at 4.30pm, 28 July at 9.00pm and 1 August 4.00pm.

Side by Side sees Keanu Reeves in an entirely different role than usual.  With the demise of Kodak and the conversion to digital well established, Reeves talks to many key practitioners (Lucas and Cameron) and Luddites (Christopher Nolan) about their thoughts on the issue.  Designed, says Reeves, to capture the change as it happens rather than to simply polarize the issue. It plays at Auckland Art Gallery 21 July at 10.30am, Rialto 25 July at 1.30pm and SKYCITY 29 July at 10.30am.

Dianna Vreeland: The Eye Has Travelled is my ‘must see’.  It’s an entertaining portrait of one of the 20th century’s most influential women.  Vreeland was editor of Harper Bazaar (1937-1962) and Vogue (1963-1971) and had a huge influence on the world around her.  She was flamboyant, full of classic sound bites (Pink is the navy of India) and somehow kept ahead of what everyone else was doing. Her unconventional style (and looks) and voracious appetite for all things artistic made sure she was always in the limelight.  Her personal mantra was ‘Style.  All those that have it share one thing – originality.’ It is playing at the Rialto on the 25 and 27 July at 11.30am and 12.15pm. Also at the Civic 29 July and 31 July at 3.15pm and 12.30pm. 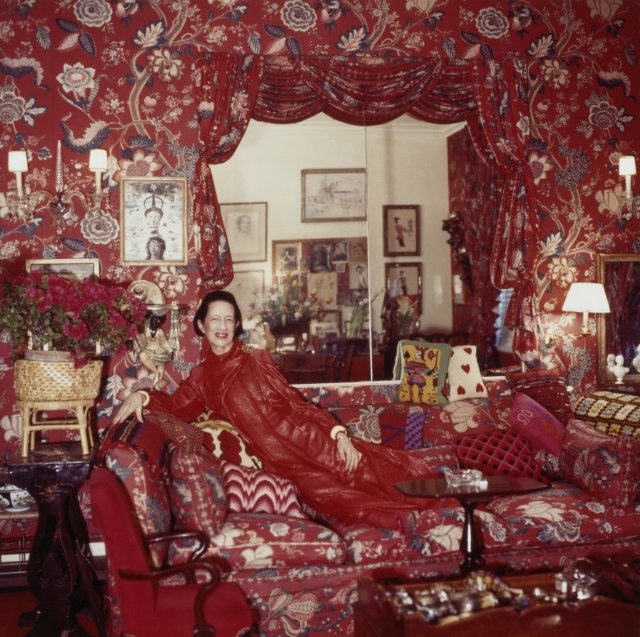