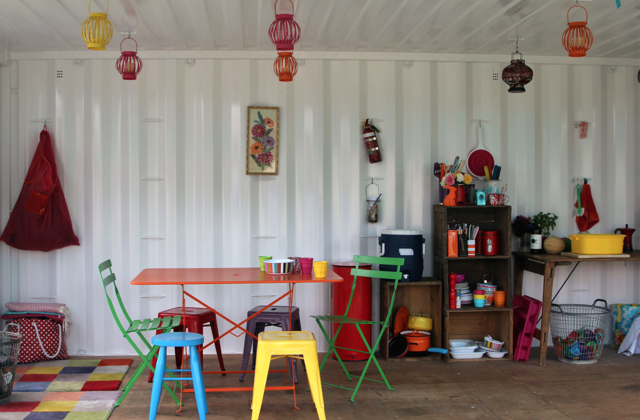 At the tail end of last year we very luckily bought a piece of land in sleepy Point Wells just past Matakana. We have been looking for the right place for many years now and this just came up at the right time.  So very quickly we had a piece of land (with no running water or power) that was ours just before Christmas.  It seemed a complete waste of the land to not be able to spend our summer up there but there were a few small issues of course.  Namely that the land was empty – no house. So I had to sort something out in just two weeks.  Even for my particular set of skills, that wasn’t going to be very much time to find something!

We could have just put a couple of tents from Katmandu up – I imagine it would have worked just fine, but I wanted to see what I could come up with.  I very luckily found a container company, Addis Containers with a very willing gentleman (Graeme) who took the whole thing on as a bit of a challenge.  I had always secretly loved the idea of using a container, and after weighing up the other options (hiring or buying a caravan) – it just wasn’t an option we could deal with in a short space of time.  We decided to use the container as once the builders come on site in a year, they can use it to lock up their tools etc so it wouldn’t just be used now.

We settled on using a 20ft Dangerous Goods Container. It opens up from the middle of one side completely as well as the end opening. I thought this would be just perfect with an awning over it running the full length of the container. So I thought I could fit a small kitchen and dining space in the container, with a lounging area out the front. Everyone managed to get the container painted black on the outside, white (Half Mt Aspiring – Dulux) on the inside and delivered onto the site within two weeks.  The floor is already ply so I just left it like that. And there we had it- something to live in, I just had to find something to SLEEP in!

Luckily, earlier in the year we had glamped with WILDERNEST in their amazing canvas bell tents.  Their beautiful design and practicality of use had stayed with me and I realized those where the tents I wanted. It wasn’t a short term solution either, when we build our house there in the next year, we will keep the tents as guest accommodation.  They are so beautiful and LARGE that we comfortably get a king sized bed in our tent and four single mattresses in the kids tent. We couldn’t be happier.

As much as possible I tried to just use things we already had, my study cupboard became the pantry, Riley’s desk became the kitchen bench. Some wooden boxes from The Vitrine that I had as side tables have been stacked to become more open storage. It I didn’t own it, I just bought something either cheap and cheerful (my collapsable colander from The Warehouse) or something I would use when the new house was built (the beautiful Xala buckets from everyday needs). The stools around the table came from home but I bought two chairs from Fermob (from Jardine) that I have loved for years.  I will buy the bistro table to go with the green eventually and they will live on my front porch when it is finally finished (after three years of waiting) some time this year (I hope!).

In this post I have just done mostly things to do with the container, and next post I will feature the fabulous tents.

All photography by the Darling Daughter Madeleine Brighouse 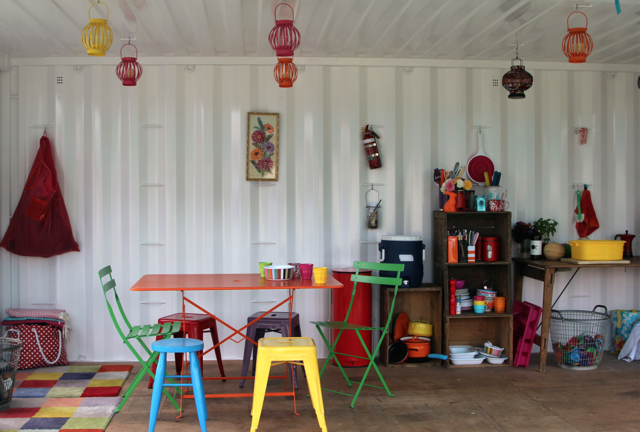 Table and green chairs from Fermob, the boxes from The Vitrine, tapestry from the Matakana Indie Market and stools from Madder and Rouge and rubbish bin from Everyday Needs… 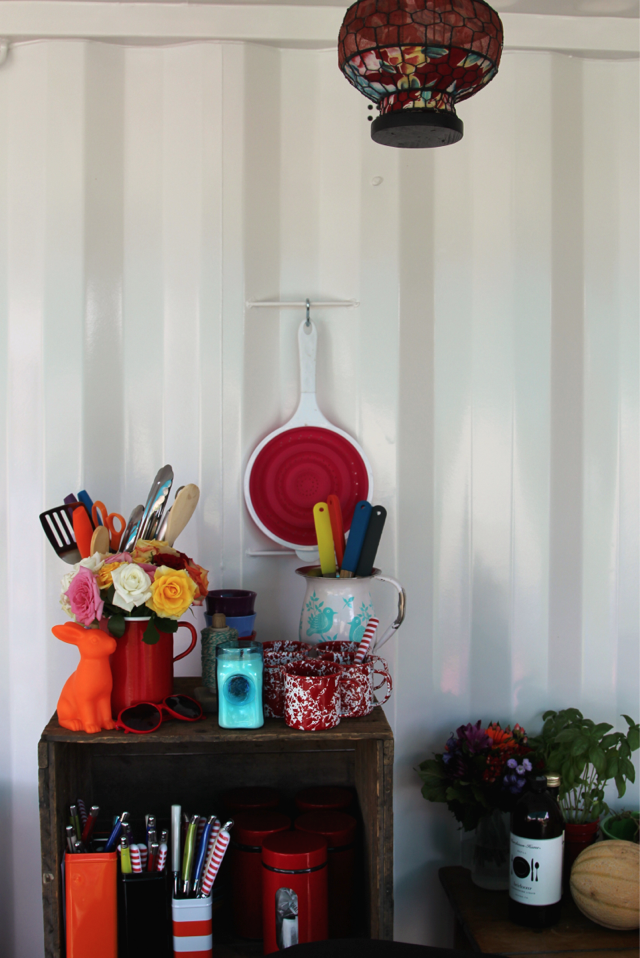 The rabbit is from The Warehouse as is the collapsable colander, enamel jug from Trade Me, marbled mugs from Flotsam and Jetsam, candle from Curio Noir, string from Everyday Needs, striped cutlery from K Mart, Murcheson Dishwashing liquid from Father Rabbit 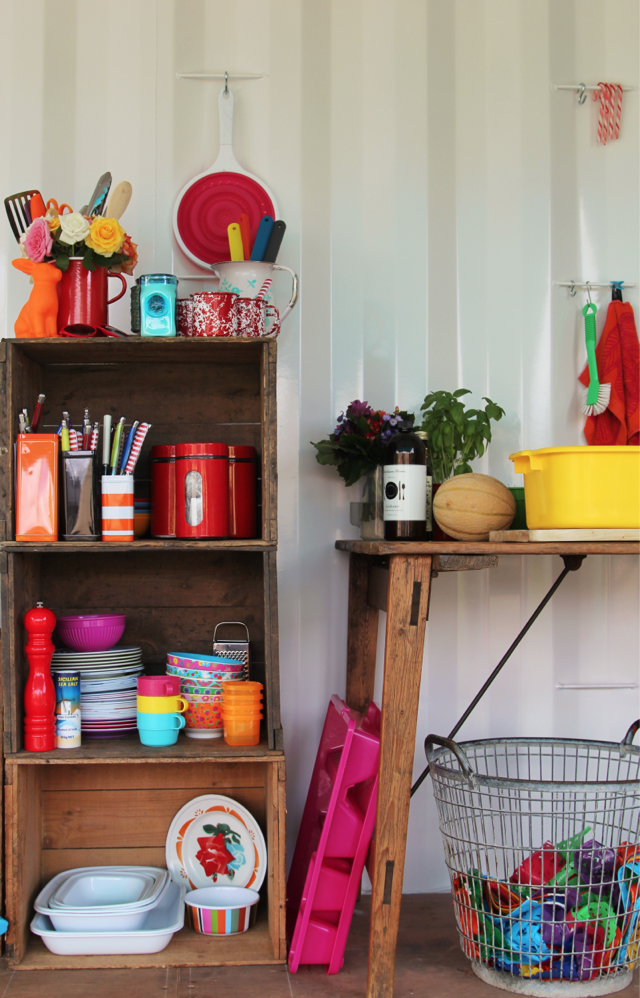 Rice bowls from IkoIko, white enamel dishes from Flotsam and Jetsam, pepper grinder and stack of coloured cups from K Mart, pink dish rack and yellow basin from $2 shop, basket from Madder and Rouge but you can find them currently at The Vitrine.  Enamel flower dish from Trade Me 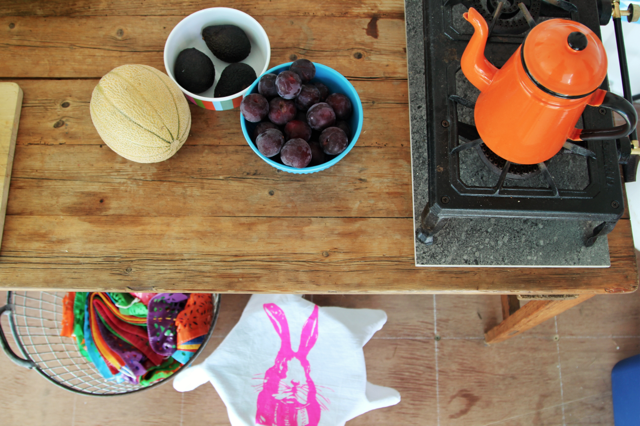 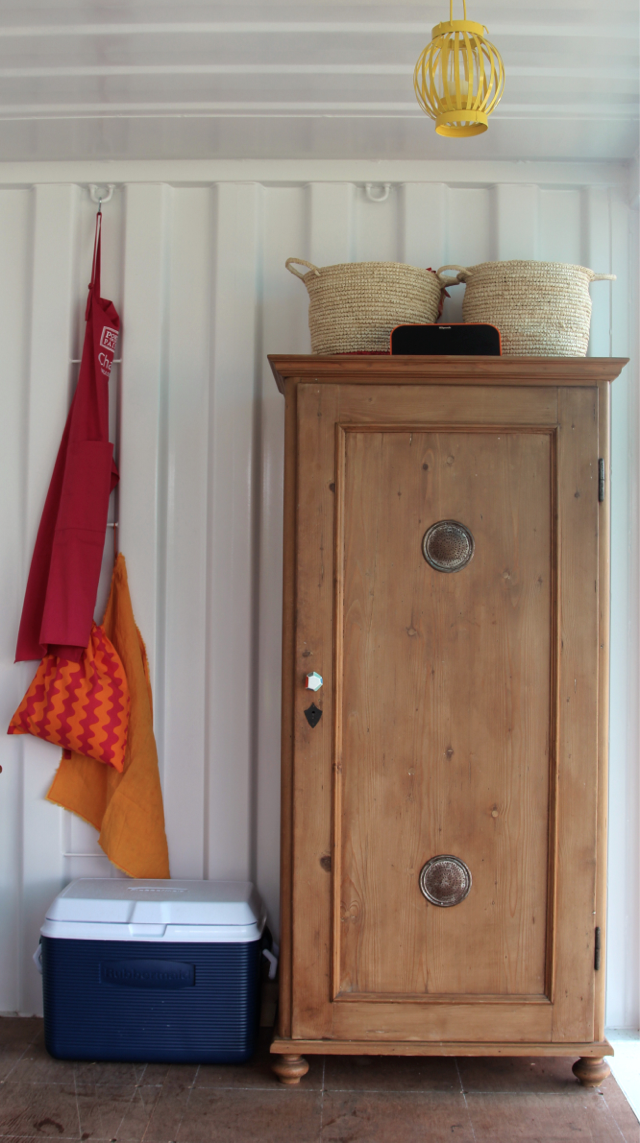 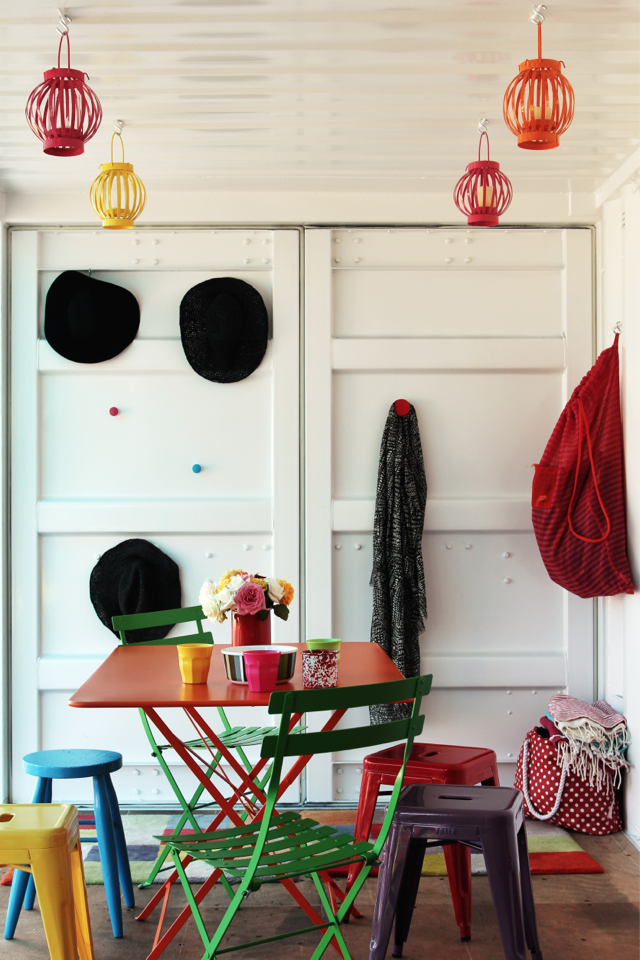 Lanterns from Parnell Agencies, scarf from NoaNoa, Rice melamine beakers from IKOIKO, red spotted bag from The Warehouse, turkish towels all from Izzy and Jean.  Stick on dot hooks from IKEA 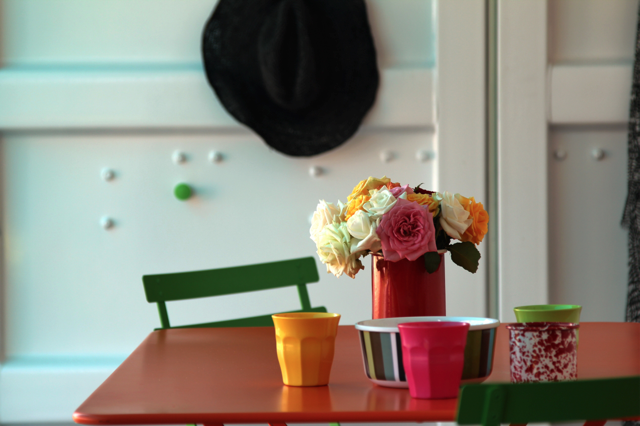 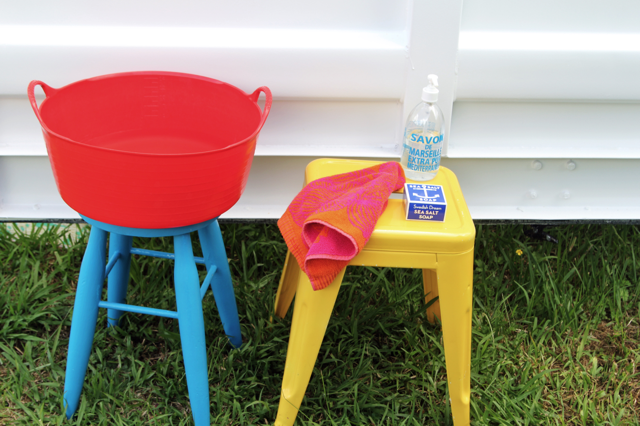 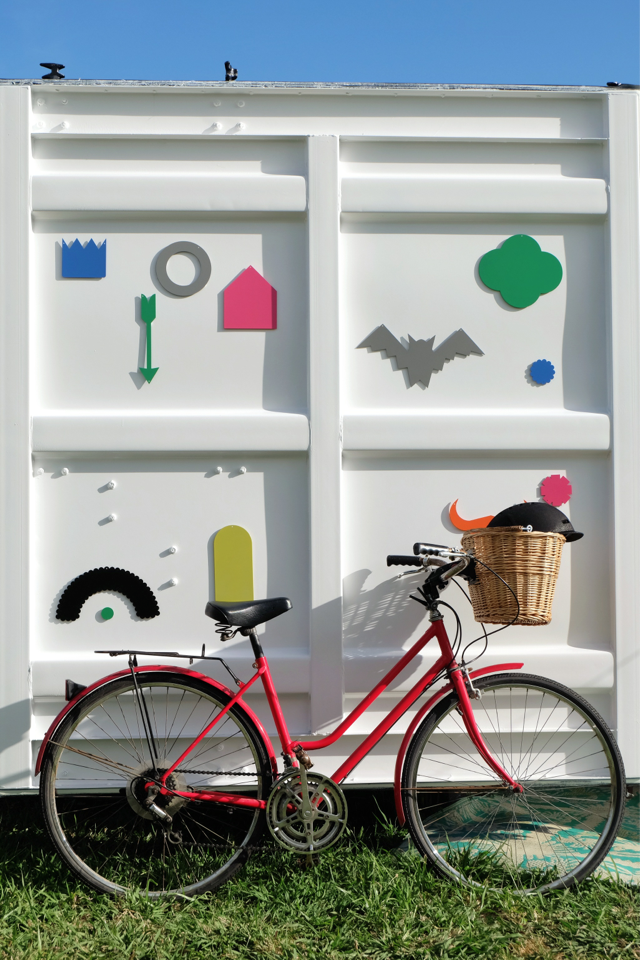 I bought the vintage Danish bike from a friend years ago, the helmet from from BLEND at The Shelter.  The amazing powdered coated sculptures are from The Vivian gallery in Leigh. 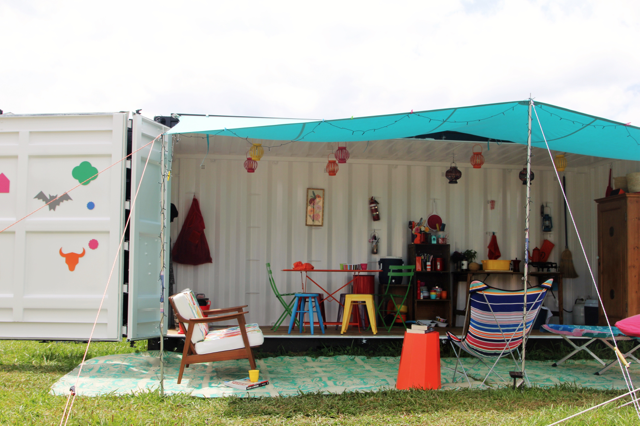 The whole kit and caboodle – the deck chairs are from Madder and Rouge, the orange stool from Everyday Needs, the plastic mats from a store in Mt Roskill (just $25 each – there are two), and the daybed is just a camp stretcher from Briscoes with an old quilt on it. 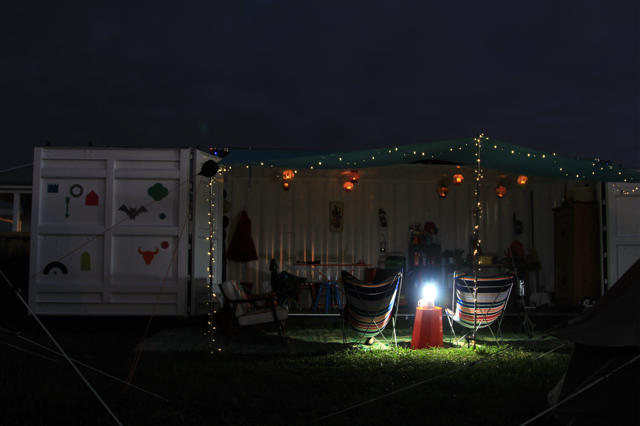 Whats glamping without fairy lights? If you want to know where anything else comes from, just ask…